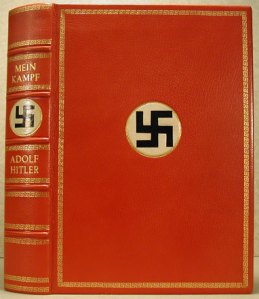 BERLIN – A ban in Germany on Adolf Hitler’s Mein Kampf should be lifted so the book can be published with editorial comments, a Jewish leader said on Friday.

“I’m basically in favor of the book being made publicly accessible with annotation,” Stephan Kramer, general secretary of Germany’s Central Council of Jews, told German radio.

Speaking on broadcaster Deutschlandfunk, Kramer said he believed such an edition should be made available online, where the book can already be read in most countries. (*)

Hitler dictated the work to his aide Rudolf Hess while in prison in Bavaria following the failed Munich “Beer Hall” putsch of 1923. It outlines a doctrine of German racial supremacy and ambitions to annex huge areas of the Soviet Union.

Kramer said the Central Council of Jews was ready to help with the annotating, and might even ask the Bavarian state government, which holds the rights to the book, to lift the ban.

In Germany, it is illegal to distribute the tome except in special circumstances. Nazi symbols like the swastika and performing the stiff-armed Hitler salute are also outlawed.

Published in 1925, Mein Kampf (My Struggle) became a school textbook after Hitler seized power in 1933. All German newlyweds also received a copy.

A number of historians have called on Germany to lift the ban in recent years, some of them Jewish.

Now, purchasers who can prove an academic purpose may secure an existing copy. Otherwise though, sales are banned and Bavaria, which was granted the German rights to the book by the postwar occupying powers, refused to authorize new copies.

Deutschlandfunk said Bavarian authorities had rejected the idea of loosening the restrictions on publication.

“[To do so] would get enormous political attention worldwide, and probably be met with incomprehension,” it quoted the Bavarian finance ministry as saying in a statement.

(*) An English-language, non-annotated version of Mein Kampf is available online at http://www.hitler.org/writings/Mein_Kampf/